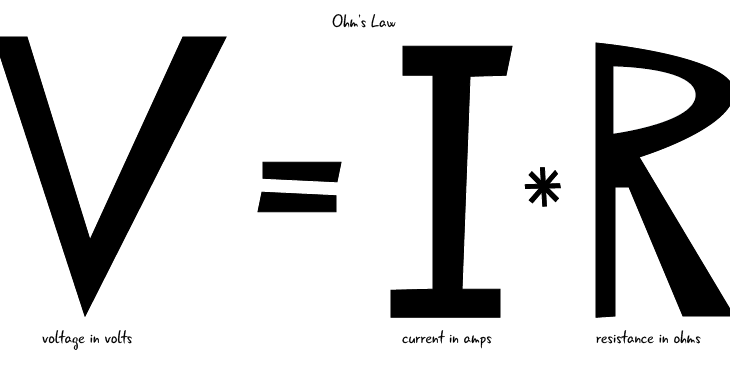 Ohm’s law is the most basic and most important law in electronics. Ohm’s law, in simple terms, states that current passing through a conductor is directly proportional to voltage. Read on to understand further.

What is Ohm’s law?

Similar to this is the case of electric current. When, you connect a battery to a wire. The voltage of the battery provides the speed to the current. This speed of current is measured in Amperes.

If you haven’t read about circuits. Read here

The potential difference (voltage) across an ideal conductor is proportional to the current through it.

According to our tap example, it can be restated as,

The speed of water flowing in a pipe depends on how much the tap is open.

Voltage – It is a type of electric force that makes electricity run through a wire. It is measured in volts. It is represented by a symbol V.

Current- Voltage does not go anywhere, what flows in a circuit is current. When electrons move forward(in any one direction) in a wire, we say that the current is flowing in it. It is measured in Amperes(Symbol – A)

Resistance – It fights with the current and stops it from moving forward. It is measured in Ohms(Symbol – Ω)

There is another interesting term which is the opposite of resistance, it is called conductance. Like the resistance measures the blockage, the conductance is more positive term and tells us, with how much ease the current can flow.

We can say that current and conductance are friends, the more the conductance, more easily current can flow.

Current and resistance are enemies, since resistance  restricts the flow of current.

Here V stands for voltage, I for current and R for resistance

This law or formula can be used to determine the voltage, when you know the current and resistance flowing in a circuit. The voltage is equal to current multiplied by the resistance.

The above equation can also be written as,

Here, current is equal to voltage divided by resistance.

It can also be written as,

Here, resistance is equal to voltage divided by current.

Before ending, some facts…